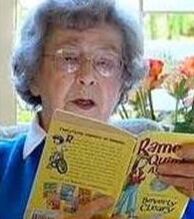 Beverly Bunn Cleary, better known as the famous author Beverly Cleary, was born in McMinnville in 1916, and spent her early years in Yamhill.  When she was six the family moved to Portland where she attended Fernwood Elementary and Grant.

Her first job was in Yakima where she realized children were searching for books about themselves, leading her to write “Henry Huggins,” the first of more than 30 popular novels.

After she married Clarence Cleary in 1940, they moved to Oakland, CA, where their twins were born. Clarence died in 2004 and Beverly passed away on March 25, 2021.

In 2008, Hollyrood-Fernwood school was renamed Beverly Cleary School. The University of Washington bestowed its highest honor for a graduate upon her. Some of her best known characters are Henry Huggins, whose literary address is Klickitat Street; Ribsy, Beezus, and Ramona Quimby. Statues in Grant Park honor her characters. Her books have been published in 20 languages, and her many awards include the 1984 Newbery Medal for “Dear Mr. Henshaw”.  ​ 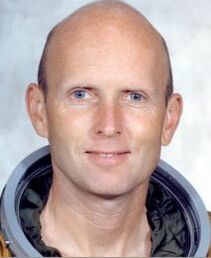 C. Gordon Fullerton was one of the nation’s first NASA astronauts and retired as a colonel in 1988 after a 30-year career in the US Air Force. He was assigned activities including piloting NASA’s B-52 launch aircraft, the Boeing 747 Shuttle Carrier Aircraft and other multi-engine and high performance aircraft. He logged more than 330 hours in space flight as an astronaut, then joined the research pilot office in Dryden Flight Research Center in Edwards, CA.

Gordon received engineering degrees from California Institute of Technology, was an F-86 interceptor pilot, a B-47 bomber pilot, a test pilot, and a member of the Manned Orbiting Laboratory program. He joined NASA in 1969 and was on support crews for the Apollo 14, 15, 16 and 17 lunar missions.

As a project pilot on numerous other programs, he had more than 15,000 hours of flying time, piloted 135 types of aircraft, and was one of two NASA pilots to fly a Russian-built supersonic aircraft. His many awards include the Distinguished Flying Cross Medal, NASA Exceptional Service Medal, induction into the International Space Hall of Fame, and the Smithsonian Air and Space Lifetime Achievement Award.

He and his wife, Marie, lived in Lancaster, CA and have two children. Gordon suffered a massive stroke in 2009 as a complication from an outpatient medical procedure, and passed away on August 21, 2013. 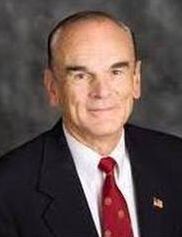 Donald Hodel has been on the national scene for many years as a top government official, businessman and evangelist.  He was born in Portland and graduated from Harvard University.
​
He gained regional notice as administrator of Bonneville Power Administration.  He was Undersecretary of Interior for James Watt, then served as US Secretary of Energy and as Secretary of the Interior under President Ronald Reagan.

He established the “Hodel Policy” that disused roads and paths could be considered right-of-way.  Critics disrupted his effort to create vast new wilderness areas but he proposed studies on the removal of a dam in Yosemite Park, and restoration of Hetch Hetchy Valley that was blocked by a US Senator and former mayor of San Francisco.

He moved to Colorado where he worked as an energy consultant and served on various charitable and corporate boards.  Following the death of their oldest son, the Hodels became evangelical Christians and speakers encouraging other families who have lost loved ones to suicide.  He was president of Christian Coalition and of Focus on The Family.

Hodel more recently has been active in energy-related fields of business and with seven different industries.  He and his wife live in Silverthorne, Colorado.