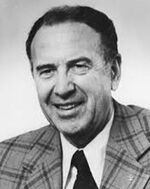 He was the recipient of the Lawrence Sperry Award from the Institute of the Aeronautical Sciences (1942), the Fawcett Aviation Award (1944), and the Daniel Guggenheim Medal (1980).

​Edward designed the Boeing 747 and was known as an "elder statesman of aviation". He was inducted into the National Aviation Hall of Fame (1991), and died July 1, 1986 in Bellevue, WA.​

Connie Averill McCready, a lifelong northeast Portland resident until her death, started in the forties as an Oregonian newspaper reporter. She was elected to the Oregon House of Representatives in 1966, was appointed to the Portland city council in 1970, and served as a commissioner until 1979, the second of three women to hold the post

In 1979, she became Portland's second female mayor, completing Neil Goldshmidt's term after he resigned for a federal position. At the end of her term in 1980, she retired from politics.

Connie passed away on December 22, 2000 in Portland, Oregon.

Gert Lamfrom Boyle was a member of a family of German refugees who fled the country in 1937.  Her father started a hat-making business that later became Columbia Sportswear, the internationally renowned apparel manufacturer and distributor. Gert and her late husband turned the business into a profitable and well-known entity, of which she was the CEO until her death in 2019.

Gert was a Portland area resident, famous for the "one tough mother" television commercials she made for Columbia Sportswear. She passed away on November 3, 2019 at the age of 95.

Mike Carroll grew up in Portland and met his future wife, Ginger, while at Grant (and married her in 1967). He was a Shrine football player, among other athletic achievements, at our high school.

He began practicing as a physician in 1977, in Fairbanks, Alaska, where he was active in the city's medical, arts, and sports communities.

Following his unexpected death on April 1, 2011 while vacationing in Seattle, the Fairbanks Cancer Treatment Center in Fairbanks was rededicated in his honor.