Four Grantonians - three former students and a teacher – have been named to the school’s Hall of Achievement in its third year for this special honor. Joining the previous eight honorees are Jim McGregor ’40, Robert Jones ’45, Dan Wieden ’63, and long time speech teacher Opal Hamilton.

Jim McGregor was an athlete and coach who garnered worldwide recognition as an international basketball coach for twenty years. His teams competed in the Olympics and Pan American games in Italy, Greece, Austria, Sweden, Turkey and Morocco. He coached women’s teams to three world championships – two for Peru and one for Columbia. He authored Called for Traveling, a title alluding to a basketball infraction. At Grant, he was mile champion of ’40 city meet, won three northwest cross country meets, earned three basketball letters and also excelled in swimming as the winner of the Lake Oswego Three Mile, the Columbia River Five Mile and the Astoria Regatta. After Grant, he was a USC miler, a Marine WWII and built the Whitworth College basketball team into a power. He was named to the Grant Athletic Hall of Fame in 2011, and died in July 2013.

Another Grantonian whose great athletic achievements have been overshadowed by life accomplishments is Robert E. Jones. Jones is a current U.S.District Court Judge, former professor of law, president of Oregon Trial Lawyers Assn. and still a motivational speaker at Grant athletic events. A four-year varsity letterman, he played on three PIL golf championship teams and in the same year won the individual state championship. After graduation, Jones served in the US Navy during WWII, graduated from the University of Hawaii and went on to Northwestern School of Law at Lewis & Clark College. He served in the Oregon House of Representatives and was on the Oregon Supreme Court. In a landmark case he upheld the Oregon Assisted Suicide Law against a federal challenge. He lives in Portland.

Dan Wieden has been named as one of the 100 great advertising persons of the 20th century, one of America’s 25 most intriguing entrepreneurs as well as Oregon’s Professional of the Year, Entrepreneur of the Year, one of the world’s 50 CyberElite of Time magazine. He is the founder of Caldera a non-profit arts education organization and camp for at-risk youth in Sisters, OR. Wieden with David Kennedy formed a small ad agency in 1982 with one client and three employees, which grew into worldwide offices, and nearly 1000 employees. Dan is known for coining the Nike tagline “Just Do It.” While at Grant, he was on the swim team and went on to graduate from the journalism school at University of Oregon. 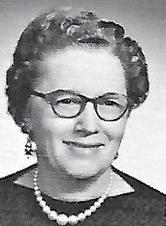 Opal Hamilton was honored May 1970 at a Portland banquet for her 45 years of teaching, 42 of them at Grant. Senator Bob Packwood always credited her for her remarkable training of students who also include Portland Mayor Connie McCready and Commissioner Mildred Schwab, U.S. Interior Secretary Don Hodel as well as Judge Robert Jones, a fellow honoree this year. Three of her Grant speech teams won state championships and her students won national awards. In a 1981 Oregonian interview she said, “I just treated them like my own kids because I never had any.” A 1985 interview said, “Whatever the explanation...Yaw’s Drive-In was the place to be on Saturday night, Grant High School was an extraordinary incubator of talent” and Mrs. Hamilton was an integral part. She was born in Kings Valley January 1905, taught in the valley and coast before moving to Portland for her 42 years at Grant. She retired in 1968 and died December 1992.