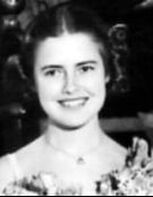 Francis Hulse Boly moved to Portland from Kansas with her family the summer before her senior year, arriving here during the Rose Festival parade. Francis, thrilled with the roses and the spectacle, told her father she wanted to participate next year.

Francis found a job at Meier & Frank’s department store, where she met Dorothy Hardin (class of ’37), the reigning Rose Festival Queen . Dorothy befriended Frances and advised her to become involved in any activity at Grant that would give her experience on stage. The advice worked well, and Francis was named the 1938 Rose Festival Queen.

​As Rose Festival Queen, Frances dubbed herself the Dust Bowl Queen. She gave roses from her float to so many along the parade route who said they were also from Kansas, that the floral arch above her was bare by the end of the day.

Frances worked as a counselor secretary at both Adams and Madison High Schools after the death of her husband. She has lived in the same house on Alameda where she and her husband moved in 1953 and where they reared their six sons. Frances appeared in Grant’s Rose Festival assembly in 1989, and made an appearance at Grant’s Last Stand before an audience who stood in honor her entire time on stage. ​ 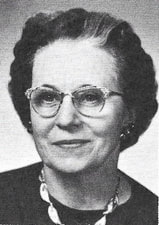 Jean Acorn Vancil, a Phi Beta Kappa graduate of Whitman College, was hired at Grant to teach English and develop the choral program. Although she weighed 100 pounds and was scared thinking she was the youngest faculty member, she was determined that neither youth, size, nor fright would defeat her.

In 1935 she attended a master choral workshop inspiring her to be the first Portland high school teacher to incorporate an a cappella program. As the music program grew, her English and drama assignments faded. She was a strong disciplinarian in her effort to teach “manners and morals as well as music,” and set high standards and expectations for being in the choir. Former students vividly recall “Tussy Talks” where she introduced the need to shower, comb your hair, stand up straight, sparkle while on stage, and respect others' faiths, which she did by using music from all religions. Her students so admired her that boys would form a chair by crossing their arms to carry her up and down the stairs because of the weakness in her legs due to polio.

In an Oregonian article, Vancil is quoted "There was keen competition for scholarship, respect for the faculty, for the school itself. Not all the years were the same, but the name Grant High School, the memory of students and parents has stayed with me. Those were my golden years. If I had any measure of success it was shared by loyal students who had pride, and by their parents and by the community, coupled with the fact that I was able to create in a school where there was never any interference from the administration." 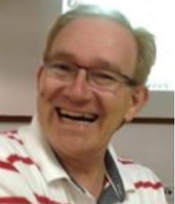 Bruce McDonald, Phi Beta Kappa at the University of Oregon, taught theatre in Portland Public Schools for 18 years; 14 of those at Grant High School. He was also Activities Director and Community Relations Coordinator at Grant for some of those years.

Craving adventure, Bruce then went abroad for 20 years, teaching in Germany, Belgium, Turkey, Brazil, India and Serbia. In every school he worked, he always pur on the biggest shows that school had ever seen. This is not a surprise, considering that while at Grant Bruce was noted for his mega-musicals; noteworthy were "The Music Man," "My Fair Lady," "Fiddler on the Roof "(the biggest with a cast of 603), and "Oliver" (a close second with a cast of 600).

​Now retired and back in Portland, Bruce enjoyed working on the commemoration program for Grant’s Last Stand as writer and director. It was entitled “Loyal and True to the Blue and Gray” and was his 224th production.