The Heritage Cultural Group (HCG), led by Nina Olsson (read her curriculum vitae), was instrumental in our quest to restore these murals. HCG is a consortium of Material Conservators offering a wide spectrum of expertise in the analysis, treatment, maintenance and collection care of artistic and architectural materials. The consortium provides leadership in the fields of paintings, murals, polychrome sculpture, metal, paper, photography, masonry and stone conservation.

Below you can read a survey HCG did about the arts at Grant, plus an overview of alternate solutions and practices.

The story behind the Fletcher Murals 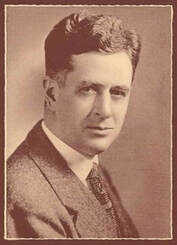 William Thomas Fletcher completed his undergraduate work at Pacific University in Forest Grove, OR in 1900. As a student, he was active in school performances, choirs (deep baritone voice), and school leadership. After graduating, he taught Latin and mathematics at the University for four years. Mr. Fletcher then went on to Columbia University, where he obtained a masters degree in 1906. Mr. Fletcher taught in Pueblo, CO from 1906 until 1910, when he moved to Portland.

In July, 1928, at age 53, Mr. Fletcher became ill and died three days later. His wife, Minnie May (Lieser) Fletcher died one year earlier. That left his three children, Donald, 19; Elizabeth, 17; and, Robert, 9, orphaned. Robert lived for a year in Pueblo, CO, with his uncle, Chester Fletcher, and his family. He then moved to Vancouver, WA where he was raised by his mother's two unmarried sisters, Jessie and Leah Lieser. Jessie Lieser was an English teacher at Grant until her death in 1956.

Upon Mr. Fletcher's death, students, faculty, and friends started a fund to raise money for a permanent scholarship and for the murals that became known as the Fletcher Murals (1). Carl Hoeckner, a significant artist of the early 20th century, was commissioned to paint the murals. 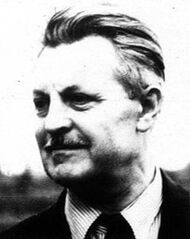 Carl Hoeckner came from a family of artists dating back to at least 1623. He arrived in the United States from Germany in 1910 and quickly became known for dealing with “the social scene.” However, Mr. Hoeckner was not always concerned with social justice: his first exhibit in the Chicago Institute of Art was a large panel of Salome dancing. With the outbreak of the World War, his painting took a much different turn. As he described them, they were not “posters,” but “social documents.” In 1916, he painted a picture called War showing people butchering each other.

Perhaps Mr. Hoeckner’s most famous painting was one titled The Homecoming. It featured gaunt, naked men--little more than skeletons--returning from war. The painting was deemed so chilling that it was rejected for the Carnegie International Show in Pittsburgh; however, the Chicago Institute of Art agreed to show it in a 1920 exhibition. Although it created an “ominous stir” all through the show, three art critics of the leading Chicago newspapers said nothing. It was again shown in the show of New York Independents in 1927 as a genuine masterpiece of Chicago artists. The Homecoming, shown below, has been matched as equal to Goya’s Disasters of War for its depiction of the horror of war. 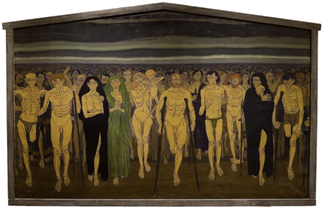 Following Mr. Fletcher’s death in 1928, a campaign began at the start of the school year to raise funds for a memorial to the late principal. The goal was to raise $5,000 for a permanent scholarship fund. By the end of the school year, $1,500 had been raised. The Fletcher Scholarship remains to this day.

Individual gifts from students, teachers, alumni, and friends raised an additional $450 to place the art memorial in the auditorium. By 1930, Carl Hoeckner was chosen to paint the murals. The exact cost is not known except that the majority of the funds came from the students. Mr. Hoeckner’s plans for the murals were sent to Portland for approval by a committee consisting of members of the Grant faculty. Its members included Mrs. Grace Hiestand, Miss Elsa Von Wintzingerode, Miss Mary Parounagain, and Miss Ethel Clarke. Mr. Hoeckner visited Portland at least twice, once to see where the murals would be placed and again in 1932 when he supervised the installation of the murals. The murals were dedicated on September 23, 1932 with students and faculty attending.

The work was to be entirely symbolic and to represent the high ideals and standard established by Mr. Fletcher (2). Keeping this in mind, the murals Ideals of Education, symbolically represented youths striving for knowledge and wisdom. Other features of the paintings depict the ideal of people coming together in peace and equality.

Mr. Hoeckner wrote in an essay, “The persistent demand of the public and many critics for only beautiful subject matter, is to me an infantile idea of the purpose of art. It is the equivalent of a child wanting to eat nothing by candy and cake. What if all the arts had to treat only beautiful, optimistic subjects? What if we had dramas with only beautiful characters, beautiful harmonious scenes and happy endings? What if we took away all sorrow, sadness, tears from music? What would be left of Beethoven, Schubert, Schumann, Berlioz, Mendelssohn, Wagner, Tchaikovsky? What if we demanded of science to report only beautiful, pleasing truths?” (3)

The murals now rest in storage at the Portland Public School District headquarters in eight specially constructed containers; their fate unknown. If you donated to the Mural Restoration Fund, please click here for more information.